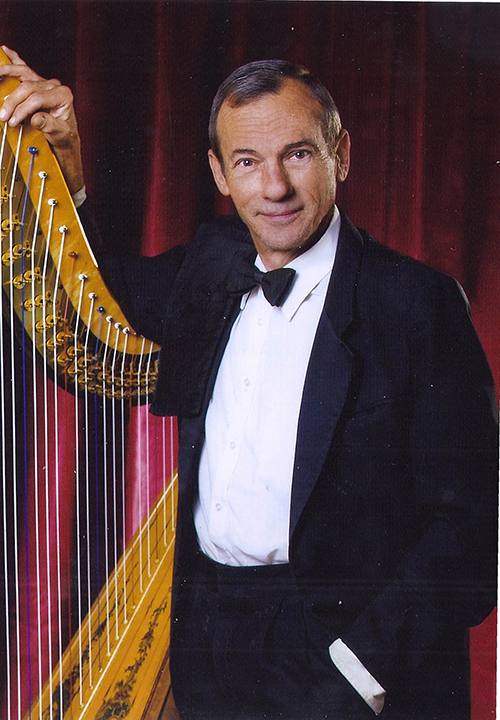 The University of North Texas (UNT) harp studio, under the direction of Dr. Jaymee Haefner, has recently received a donation four historic harps from the 18th and 19th centuries.  David Williams, UNT alumnus (MM, 1976) donated the harps to the University of North Texas in May of 2014.  David recently retired from his position of principal harpist with the Dallas Opera and the Fort Worth Symphony Orchestra, positions which he held since 1989.  Previously, he also served as second harpist for the Dallas Symphony Orchestra. David received his BM (1971) from SMU, studying with Julia Hermann. He received his MM (1976) from UNT, studying with Charles Kleinsteuber. David also studied privately with Dorothy Lymann.

David Williams, harp builder and technician, acquired and restored the historic harps himself, which included wood work, gilding, painting, and rebuilding of the action.  The four harps span much of the pedal harp’s development and history.  The oldest harp, a single-action crochet harp, was made by Jean Henry Naderman (1735-1799) in Paris, and dates from c. 1770.  The second-oldest harp is also a crochet harp made by Naderman, and dates from c.1780.  This harp has a hand-painted soundboard with chinoiserie motifs and is gilded with 24K gold.  These ornate single-action harps represent the style of harp which would have been familiar to W.A. Mozart and Marie Antoinette.  The third harp dates from 1816, and is a Ram’s Head single-action made by Sebastian Érard (1752-1831) in Paris.  This harp features an early fork mechanism.  The fourth and youngest harp dates from 1836 and was made by Sebastian Érard’s nephew, Pierre-Orphee Érard (1794-1855) in London.  This harp has double-action and includes an eighth pedal to control the shutter-mechanism to open and close the sound holes on the back of the harp.  Pierre-Orphee Érard also developed the popular Gothic model, which would have been played by several respected harpists, including Parish Alvars and Henriette Renié.

Although these donated harps are unplayable due to their age and brittle soundboards, the hook and fork mechanism are partially-operational, which makes these harps an ideal teaching tool for university students.  This is the goal that David Williams stated when donating the harps to the University of North Texas.  He says, “I’m just glad that my guys found a good home.”   …And they have indeed found a good resting place, as the donation has spurred several articles to be published in the Dallas-Fort Worth Metroplex, and several interviews about his generous gift.  Harpists are fortunate to have a tangible piece of harp history, which visibly displays the rapid development of the instrument during the past 200 years.

Visitors may contact Dr. Jaymee Haefner at jaymee.haefner@unt.edu or 940-565-3739 to make an appointment to see the harps, which reside in the UNT harp studio at the College of Music.

Click for a video and an article about the harps, donated by David Williams to the UNT College of Music.